For years here at ASG, we have always held Joe Ely in the highest esteem and have been trying to synchronize our schedules so that he could attend ASG’s annual songwriter symposium. This year, the stars aligned and we are proud to welcome Joe Ely to Symposium 2012. 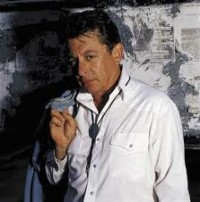 If there is one word that best describes Joe Ely as an artist, it is integrity. A legendary, genre-bending Texas artist, Joe Ely, was born in Amarillo, Texas, but would later migrate to Austin, along with songwriting pals, Butch Hancock and Jimmie Dale Gilmore (aka The Flatlanders) in the 1970s. Ely’s music and would not only transform and expand the audience for Texas music around the world, but it would also make Joe Ely fans out of a diverse array of other major musical artists, including Bruce Springsteen, Uncle Tupelo, The Chieftains, Lyle Lovett, John Hiatt, Guy Clark and, perhaps most famously, punk rock icons The Clash, who Joe toured with back in the day. And, this is just a short list of Ely admirers.

Joe Ely has always followed his own beat in the world, and has never allowed his music to bow to the conforming pressures of mainstream acceptance. Yet, despite that rebellious tendency, or because of it, Joe Ely has carved an illustrious and storied career that any artist would love to have for their own. At the heart of his music lie the foundations of honky-tonk, Texas country and Tex-Mex, all blended with Joe’s unique take on rock and roll. The end result is a musical stew that is uniquely Joe Ely. Nobody does it like Joe!

His career landmarks are too numerous to mention in a brief summary for Symposium 2012, but if you have been a fan of Joe Ely for years, as we have been here at ASG, then you already know. If you have not experienced Joe Ely, or perhaps have only sampled here and there, we encourage to make sure you are present Friday evening, January 6th at ASG Symposium 2012 for “An Hour With Joe Ely,” moderated by KGSR radio personality, Roger Allen. We promise you will be inspired by Joe Ely.